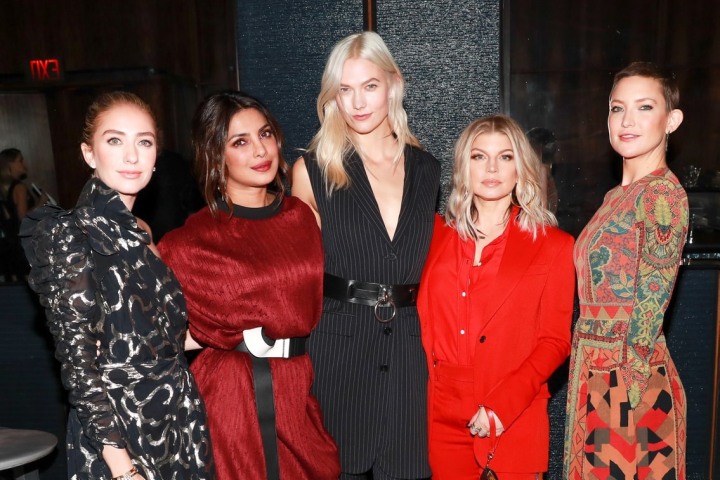 Last night, we hosted a star-studded dinner at the renowned The Grill and The Pool in New York City to celebrate the launch of Bumble Bizz, which ins tantly connects you to other professionals through geo-targeting and enables you to swipe through nearby people who are looking to network, connect, and mentor.

We began the evening with a cocktail hour for guests who included Editor-in-Chief of Instyle Laura Brown; Bumble Creative Directors Sara and Erin Foster; philanthropist Princess Beatrice of York; Editor-in-Chief of Elle Nina Garcia; ManRepeller entrepreneur Leandra Medine; fashion designer Rachel Zoe; musician Jillian Hervey of LION BABE; and Founder of DryBar Alli Webb. The cocktail hour was followed by a seated dinner where the hosts spoke in support of our female-lead, female-first mission and the importance of women in business.

Our OG Queen Bee Whitney Wolfe Herd was the first speaker of the evening: “We’re in a moment. Hollywood to the White House. We’ve seen this movie before, but today we’re taking the power back. Hashtags are not enough. We need to move from “me too” to “I believe you” [to] refusing to let this abuse happen to anyone again.”

Whitney called misogyny an epidemic, the cancerous cigarettes of our generation. She ended her speech with the same sentiment and conviction that spurred her to found Bumble: “We’re not going to solve it tonight or tomorrow, but swipe by swipe we can create change. We can give women equal opportunities in dating, in friendship, and in business.”

“It was wonderful to co-host the Bumble Bizz launch event in support of female empowerment and women in business," said Priyanka Chopra. “It was amazing to be in a room full of strong, independent female leaders and hear about their individual journeys throughout their career. Bumble Bizz has created something really special and I hope women everywhere join to further lead the conversation."

“I am thrilled to have co-hosted the Bumble Bizz launch event alongside such an amazing group of women. Bumble Bizz is all about giving women a platform to feel empowered and lead the conversation in business. As an entrepreneur, I believe in the importance of that mission," said Kate Hudson.

“With the launch of Bumble Bizz, Whitney is using technology to connect and empower women as they pursue their career goals and build their professional networks,” said Karlie Kloss. “Throughout my career in fashion, I’ve learned the power of both mentorship and a strong network. It’s exciting to know that platforms like Bumble Bizz exist to support the next generation of women as they begin their own careers and follow their dreams.”

8x Grammy Award winning singer/songwriter Fergie joined the hosts as the surprise musical guest for the evening, performing some of her biggest hits and new music from her recently released visual album, Double Dutchess. Fergie amazed everyone in attendance with her perfectly over-the-top performance. Guests were especially delighted when Fergie worked her way into the crowd and broke into the splits.

Iconic fashion photographer Arthur Elgort and daughter Sophie Elgort were on site to take one-of-a-kind “snapshot” style portraits as a gift for guests to use as their Bumble Bizz profile picture. This was the first time that father and daughter have worked together.

The cocktail hour, formal dinner, and after party took place at The Grill and The Pool in New York City, the iconic scene of networking lunches and dinners over the last sixty years.

We couldn’t have asked for a better way to launch Bumble Bizz. Thank you from the bottom of our hearts to everyone who attended this unforgettable evening in support of women in the workplace and across the world.

Together, we can enact real change. Now we’re in business.