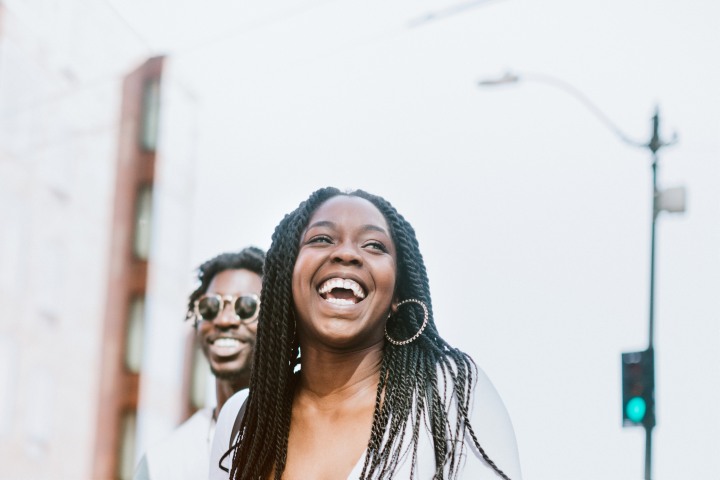 Loving a Black Woman Is a Political Act

A few years ago, three college friends and I decided to take a road trip from Dallas to New Orleans. Somewhere between badly belting Leon Bridges and gushing over the southern sky, we ended up spending hours talking about love, opening up to each other about our desires and insecurities. My then-roommate suggested that one of the boys on the trip and I would make a cute couple. I denied the romantic chemistry, and the boy (who, by the way, is also Black) quickly shot back, “Well, I don’t date Black girls anyway,” as if to clarify any misconceptions.

The car became completely silent. He saw the sorrow on my face and apologized profusely. I didn’t turn around. I didn’t respond. I just sat still and replayed the insult over and over in my head.

It wasn’t necessarily surprising that someone would say those words to me. In fact, I’d heard them before. Since second grade, schoolboys would say things like I was “pretty for a Black girl” or that “Black girls just weren’t their type.” In those moments, I didn’t understand the subliminal racism tucked away in these seemingly harmless statements. I felt discomfort and rejection, but my adolescent self didn’t know how to name the feelings.

Growing up, I felt hopeless about meeting someone who would authentically like me. And even once I was able to identify those hurtful comments for what they are—microaggressions—I kept hearing them. Things like “I’m not sure if I would date a black girl, but I would fuck one,” or “You would be beautiful if your skin was lighter.”

The culture around me also seemed to say that I was less-than, with movies and TV shows depicting women as undesirable sidekicks and body wash advertisements implying that Black women were impure. All of this indirect and overt rejection for women who looked like me led to immense self-hatred and shame, and I concluded that if someone wanted to date me it was because they were desperate, bored, or compromising their standards.

I concluded that if someone wanted to date me it was because they were desperate, bored, or compromising their standards.

But finally, a few years ago, after reading lots of Black literature, processing with a therapist, and talking endlessly with other Black people, I realized that none of this really had to do with how I looked, acted, or how lovable I was—it was all about our culture’s devaluation of Black women. I had been internalizing societal values that deprioritize the livelihood of Black women and dismiss our joy. Those microaggressions reflect a belief system that says a Black woman’s physical appearance compromises not only her worth as a person but also her ability to be a good partner, leading people to casually assert that they simply “don’t date Black girls.” The truth is, our society neglects, excludes, ignores, and appropriates Black women—and this fully extends to romance, so of course, I always have to consider race while dating.

I’ve come to the conclusion that dating a Black woman is a political act. Because even after years of rebuilding my identity and self-esteem, I still have to be realistic about the widely accepted perceptions of people who look like me. My identity cannot be separated from the historical and sociocultural implications of Blackness, and neither can the way I exist within a relationship, whether it’s with another Black person or someone of a different racial background.

With this in mind (and believe me, it's always on my mind), I’ve learned how to better navigate the undeniable, complicated interconnection between race and dating. Before developing deep feelings for someone I have to ask myself questions like, “Is my crush attracted to Black people?” “Is my crush just fetishizing me?” “Can I trust my crush to consider my experience as a Black person in America?” As if liking someone is not already overwhelming, being a Black woman makes it ten times more complicated!

My identity cannot be separated from the historical and sociocultural implications of Blackness — and neither can the way I exist within a relationship.

My vetting process also includes tough conversations. I’ll ask my crush about relevant current events and politics to try to assess if they’ve done the adequate emotional labor to deconstruct their racial biases and educate themselves. In addition to listening to their answers, I pay attention to tone as well as the things they’re not saying, which can also be quite telling.

Yes, this can be exhausting and frustrating, but ultimately it’s rewarding to think about whether my potential partners have considered how political it is to love me. Because loving a Black woman also means advocating for Black women. It means protecting Black women. It means mourning with Black women. It means uplifting, validating, and listening to Black women. Before all the heart eyes and kissing, I need to feel reassured that I'm opening myself up to someone who is truly down for me.