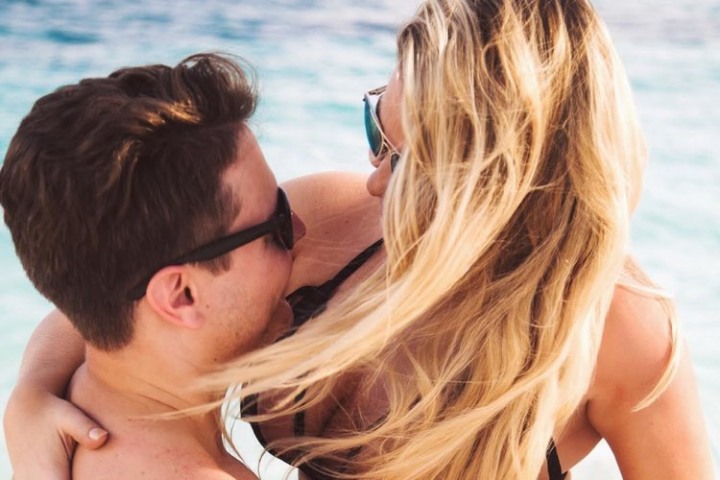 Garett and Christine's story, as told by the happy couple...

Garrett, my now boyfriend, roommate, best friend - was one of my first couple matches on bumble. What stood out to me was that he looked like a family guy and I loved that. I love my family so that meant a lot to me. The best first impression after was that he was the ONLY one who offered to pick me up on our first date. I had mentioned to him when we first met on the app that I didn't like the concept. I was a woman who liked to be wooed and making the first move was not something I cared to do.

I should have known from his response that he was different than the other guys. He immediately let me know that all I had to do was say that first "hey" and he would take care of the rest.

The first date we went to a local spot that's casual - it happened to be cinco de mayo. There wasn't any "moment" on the first date where I felt like I knew he was perfect for me.

However, after a few more nights out together I realized he loved doing accents. Oddly enough we both started talking to each other in weird voices, this corky thing we'd do in the car. It's something I've always done and to know he had too and although others might not think its funny. We both did (I now never receive a voicemail from him in anything but an accent - so many voicemails from him in so many different characters haha).

We've totally fallen for each other. We have a dog together and now live in a house with my best friend - three's company style!!

Thank you so much for sharing your story with us - we are so happy for you two! Congratulations and so much love from The Bumble Hive!

Nothing makes us happier than seeing Bumble success stories! To submit your story, please email stories@team.bumble.com.