Jenn and Matt matched on Bumble in January of 2016 and were married in a surprise wedding a few months ago, which was covered by EliteDaily! Their amazing story is below in their own words.

Jenn: “We met about a week after matching on Bumble. We had been chatting throughout that time and found that we had a lot in common and actually had a mutual friend! One of my roommates was also a coworker of his. We both secretly grilled our friend about the other person before the first date!”

Matthew: “Luckily for me, I had an event with our mutual friend a few days before our date so I had a chance to vet Jenn. It was more playful than anything, but I did get some good insight on what to expect!”

Jenn: “For our first date we met at a bar/restaurant called Beehive in the South End. He got there first and I spotted him at the corner of the bar when I got there. We both agree there was an immediate spark. Conversation flowed easily. I even had my first ever dirty martini that night – turns out they’re delicious even if you don’t like olives. My friends had been texting me asking how the date was going and he made a joke about my phone blowing up so I told him who it was and he suggested we go meet them (they were at a bar down the road). He actually met a couple of my best friends that evening, which was really fun.”

Matthew: “The BeeHive was great – it was my first time there but I had heard great things from my friends so that’s where we chose to meet. I landed two perfect seats at the bar off to the side with a perfect people-watching vantage point. Jenn tried her first ever dirty martini (she is now hooked). We ended up having our first Kiss at Beehive – totally unexpected – but it felt right. After a few hours at BeeHive, we walked over to The Salty Pig to meet her best friend and her best friend’s boyfriend. I think I met most of her roommates and close friends over the next week.  I think it was date #5 when we finally had the night all to ourselves.” 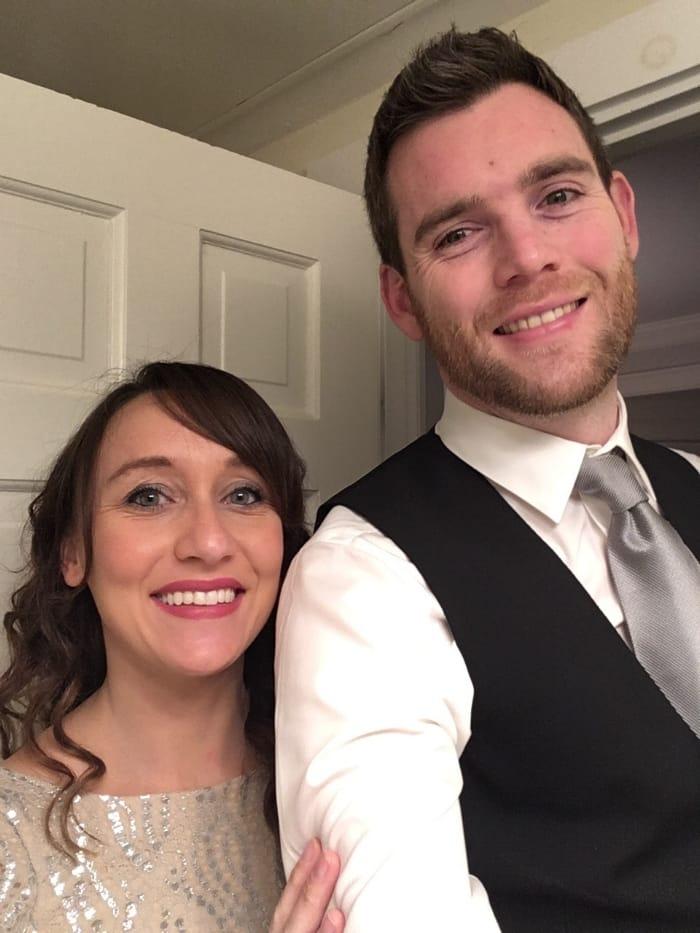 What was the first move on Bumble?

Jenn: “So, Matthew’s profile said ‘Sapiosexual. No, seriously.’ I promptly searched sapiosexual on the internet and found out it meant attracted to intelligence. I messaged him asking if having to Google the word ‘sapiosexual’ was a deal breaker. Turns out it wasn’t.”

What was the first response?

Matthew: “It was a stressful exchange initially – I wasn’t sure if my message sent for hours. I eventually sent another message later that day. I really wanted to meet this girl, so I was willing to break my 1 or 2 message rule! As for the message, I probably teased her for needing to Google “sapiosexual,” then mentioned we had a mutual friend in one of her pictures to break the ice.” 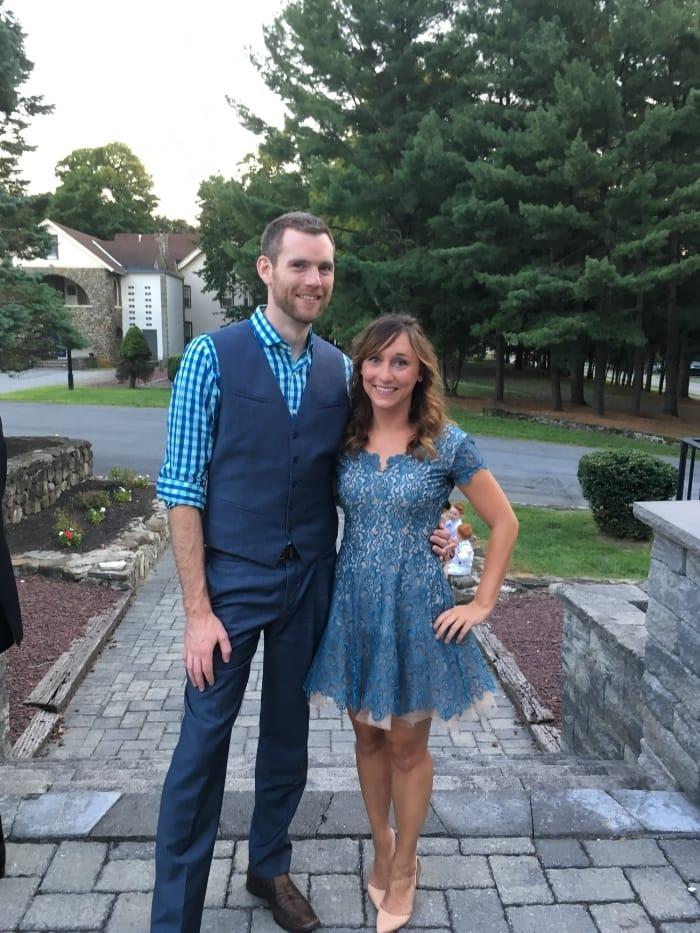 Jenn: “We had an immediate chemistry that first evening and the conversation flowed so easily, which was refreshing. I think we both were resistant to getting into a serious relationship at the beginning; I had just gotten out of a long-term relationship and he had just moved to Boston. However, the more time we spent together, the stronger our connection became. It grew into something more serious before we even knew what was happening. It definitely felt sort of fateful to me.”

Matthew: “Being a recent transplant to Boston from Connecticut, I was on a dating frenzy. There were so many more options in the city compared to my sleepy town. I was literally out almost every night on another date – it was awesome! However, immediately this one felt different. Jenn and I hit it off and we ended up seeing each other several times over the next week. Usually this would feel like overdoing it too early, but this time it felt right. We couldn’t get enough of each other.” 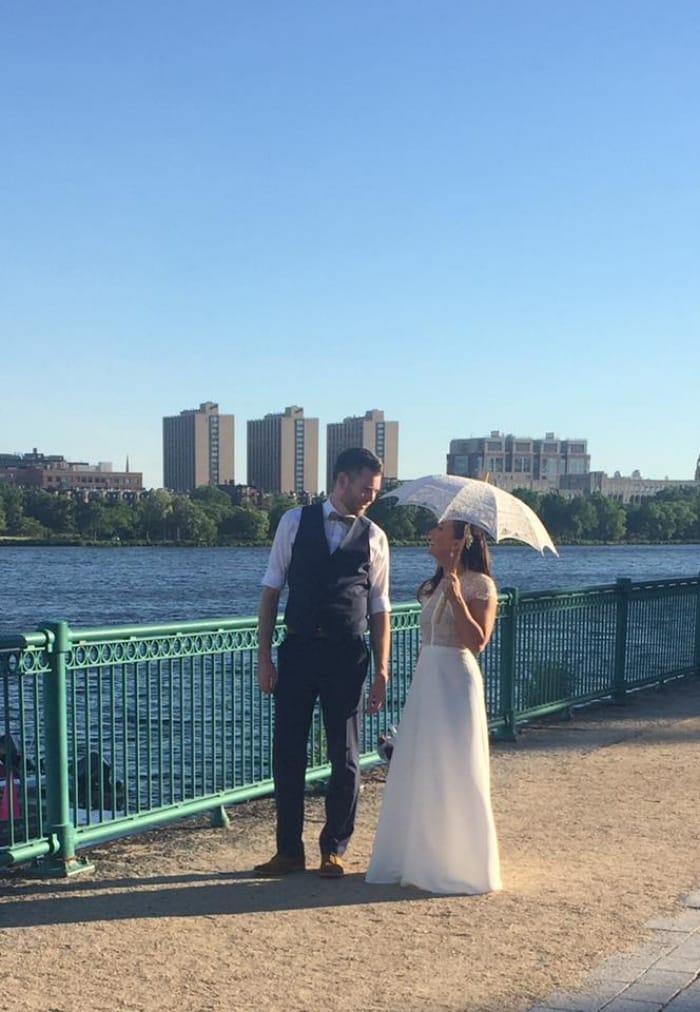 Jenn, what was your first impression of Matthew? How did you feel before the first date?

“My first impression was that Matthew was definitely different from anyone I had met before. He was very thoughtful and serious but then would surprise me with a random comment about something unexpected or a weird joke that I appreciated. I guess I was just very intrigued to get to know him better and figure out how he ticked.”

Matthew, what was your first impression of Jenn? How did you feel before the first date?

“I was very excited for this date. Our mutual friend talked Jenn up quite a bit, so I was pretty stoked to meet her after hearing about her. We hit it off as soon as we met. She had a funny, sarcastic banter and also was able to hold strong and engaging conversation throughout the night. She had great insights and made me laugh the entire time.”

What do you consider a unique aspect of your relationship now?

Jenn: “We have a mutual trust and understanding in our relationship that I think is truly unique. I know that I can share anything with him and, in response, feel supported. It’s really the foundation of our partnership, in my opinion, and what makes us so strong as a couple.”

Matthew: “It’s hard not to copy Jenn’s response because its so true! Mutual trust, understanding and communication are three things we made priorities as we built our foundation. We’ve created an environment where sharing is encouraged with empathy and understanding. We’ve had several difficult conversations over the past year, but the values we share really helped us through.” 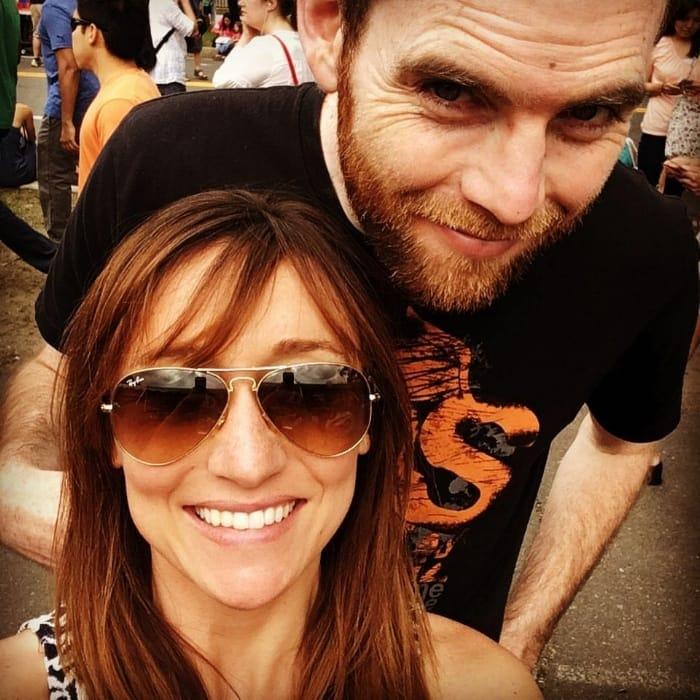 Jenn: “A few months ago we decided to start planning a surprise wedding to take place on my 30th birthday. We decided to make everyone think they were coming to a surprise 30th party for me. Matthew hinted that he was going to propose (for extra incentive), but the plan all along was to get married. The planning was so special because we were able to do it all together. Keeping it a surprise was (surprisingly) romantic. We pulled it off, and it was such a fun and special day celebrating our love and future together.”

Matthew: “The wedding went off without a hitch. The weather was perfect and everyone was surprised. It’s cliche but the day was honestly perfect. It was about us and celebrating our marriage. I’ve been to stressful weddings before and this had none of that.  I am so lucky to have met someone who is open to bold new ideas and has a sense of adventure.”

Jenn: “In the immediate future, we plan on having a couple big backyard barbecues this summer to celebrate with a bigger group of my family and friends in MA and his in CT. We have an annual trip to Martha’s Vineyard planned with another couple and can’t wait to relax and celebrate there, as it’s one of our favorite places to be. As far as a honeymoon and further travel goes, we definitely want to save up over the next year and plan something memorable; there are so many places to visit on our bucket list! From there we’ll see what the future brings; we definitely want a dog someday and have discussed the possibility of becoming foster parents someday as well. I can’t wait to see where life takes us and to share it with such an incredible man!”

Matthew: “I’m looking forward to our week on the Vineyard, then our two celebrations with family and friends in CT and MA, many of whom were surprised to hear about the wedding and have yet to see us! After that, it’s pretty much a blank slate. I’m sure we’ll enjoy our first year of marriage, our new partnership, and planning the months and years to come!” 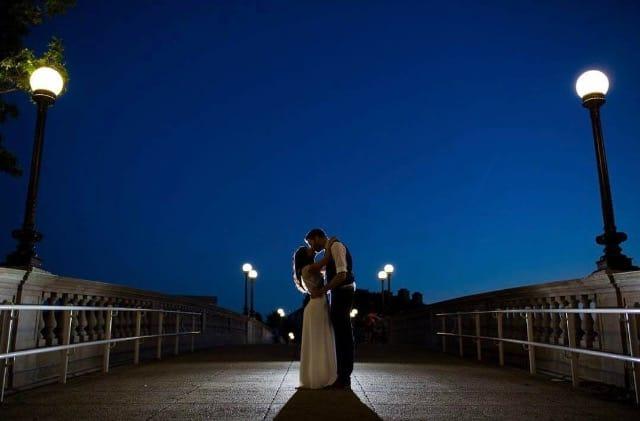 Thanks so much to Jenn and Matthew for sharing their story! We’re so happy for you two!

Nothing makes us happier than hearing Bumble success stories. To submit your own success story, email stories@team.bumble.com!