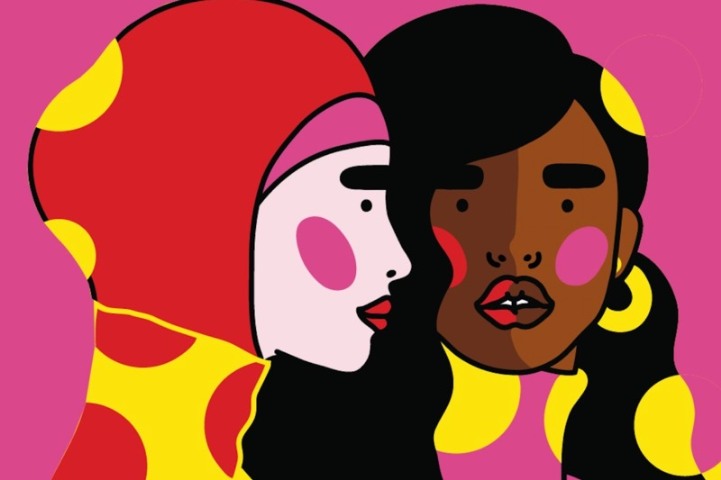 Dating (Sort Of!) As A Modern Muslim Woman

I exist in many spaces as a Muslim woman and play countless roles. Within the safe walls of my home, I’m a daughter, an administrator, and a chef. (Just kidding! I’m vegan and my family refuses to interact with my ‘salad bread,’ as they call my pizza.) I’m the embodiment of my parents’ hopes and dreams, as many first-generation kids are.

In my university classes, I’m the annoying overachiever who forces professors into post-class meetings to improve my grade. I’m also often the only hijabi — that is, woman wearing a hijab, or head-covering — so I can pretty much never skip class unnoticed.

And in the dating world, I’m a ghost. I don’t mean that I make a habit of ghosting people, although shamefully I’ve done it once or twice (I’m working on my commitment issues)! I’m a ghost in the sense that I don’t exist. And when I do, I’m constantly looking over my shoulder, ready to defend myself and my beliefs to both Muslims and non-Muslims alike.

My parents have always been somewhat progressive. I’ve always been treated as equal to my brother. Most gender roles that would be expected in an Arab home didn’t entirely apply, and all family decisions were discussed as a group. My parents only enforced a few rules, mainly to ensure that I didn’t grow up to be the worst version of myself. The biggest rule, which was heavily enforced: no dating, ever.

In my house, dating was the most condemnable act, right after becoming a vegan socialist (sorry, mama). In my formative years, I held that narrative very close to me, and it eventually became part of my very confused identity.

The negative perceptions attached to dating in the Muslim world have made it taboo, so it’s rarely discussed at all. I haven’t even entirely reconciled what it means to date as a Muslim yet. As much as I hate the patriarchy, I love boys — even as they show me over and over that they’re unable to conceptualise the intricate frameworks of systemic sexism. I just love them.

So as I became an adult and settled into my identity as a modern twenty-something, I became a ghost, both observing the dating world and haunting my multiple crushes online.

I should make one thing clear. I haven’t “dated” anyone in the traditional sense of the word. As in, I’ve spent many Valentine’s Days writing angsty poetry, admiring other people’s love. But I have delved into the literal worst part of the dating world: talking. It’s this ambiguous realm of non-exclusivity, where you’re clearly both interested, but unclear just how interested. During this stage, I’ve had to balance the stigma around dating as a Muslim woman with the desire not to die alone. So I’ve tried Muslim dating apps, aiming to meet dates somewhere other than a bar as I wonder if maybe being alone wouldn’t be so bad.

The thing about dating as a Muslim woman is that you can never win. You’re either subjected to the hordes of entirely-too-eager-to-get-married men on Muslim-specific dating apps, which is overwhelming when you’ve barely interacted with men. Or, you just bide your time, hoping that you run into your soulmate as friends and family try to set you up at every turn.

In my case, when I do meet someone of interest, it never gets past the talking stage. Many of them men I’ve met have this monolithic idea of what a Muslim woman “should” be: quiet, dainty, ready to be a wife.

Or, surprise! They’re ICE, or deportation, officers. Yes, that’s an actual thing that happened. The general state of the world is so terrifying that it’s no wonder it’s hard to explore finding a partner outside of the Muslim community.

There are moments where things feel a little hopeless. And I know this is a universal experience, not just that of a single Muslim woman. I often find comfort in the idea the struggles of single life are a unifier. Eating an entire pint of (dairy free) Halo Top alone on Friday night is an experience that transcends our differences.

Beyond that, something that gives me hope is that there’s always a light at the end of the tunnel. The more we interact with people, within the context or dating or not, the better the chance we have at breaking down barriers. Whether that’s addressing taboos, challenging stereotypes, or just being exposed to someone else’s lived experience, each interaction holds value and meaning. For now, that seems like a pretty good consolation.