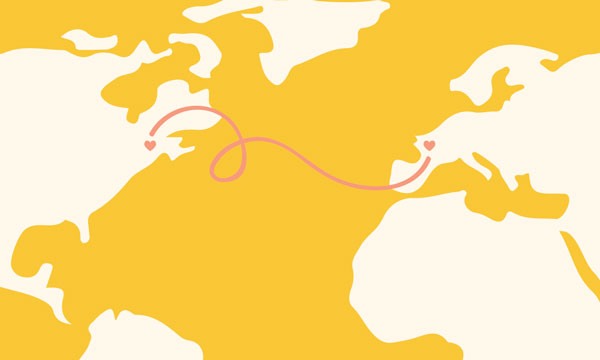 Lessons, to be sure, have been learned. Some were just lessons that come with experience: that every relationship is different; that, at the end of the day, no hard and fast rules ever really apply; rather, it’s about the needs of both people.

Some are more specific to the distance: that communication is a commitment worth taking seriously, but dependence will no doubt screw you in the end. And that it always comes down love. (And maturity.) That love alone isn’t enough.

Here’s my long distance love story in three parts: a little self-analysis of what worked and what exploded in my face.

You know I’m a true expert because my first long distance relationship was when I was still in high school. After a summer working at camp together, I started dating someone who was entering his sophomore year at college.

His college was a two-hour bus ride from the city where I lived—and I took that bus every few weeks for the next six months (suffice it to say, I didn’t have my parents’ support and thus was without the use of their car).

The relationship was intense; he was my first serious boyfriend ever. We talked every day on the phone—sometimes for hours—and wrote each other letters and poems. The distance made the relationship feel even more romantic, and we talked about someday traveling and living together.

Meanwhile, I was figuring out which college I would be going to next year, and my life began moving in exciting new directions. In the end, I was smothered by the distance and the fervency it created and broke up with him a few months before graduation.

In college, junior year, I again fall for someone older than me and living in a different place. This time, instead of being a few hours away by bus, seeing each other requires flying across an ocean. Somehow, this isn’t a deterrent, and we continue the relationship (again, after spending a summer together).

I don’t see him at all for the first semester (four whole months), and then I go on exchange and our commute goes from a five-hour to a one-hour flight. Still, though, it’s long distance, and I spend most of my semester away traveling around Europe on discount airlines with my boyfriend.

The fantasy comes to an abrupt halt the following summer, when we’re both back at home and he decides to start his adult life across the country. Enough is enough and I return to college less one boyfriend.

My third and final relationship is the one that I’m still in. And, at turns, we’ve lived blocks away, across the city, on the other side of the continent, and together in the same apartment.

The first time I dropped him off at the airport about a year into our relationship—he was flying to San Francisco to spend a few months trying to get his new company off the ground—I cried alone in the car afterwards and promised myself I’d never let myself live apart from this man again.

Three years later, I got a chance to break that promise when I moved to New York for a job opportunity I couldn’t not jump on. He couldn’t move with me right away (he also had a great job), so I left the apartment we shared and moved with a new mutual promise that this wouldn’t be forever. We would find a way to live in the same city again before too long.

And we did. After two years, I moved back to that very same apartment, and the decision was the right one for both of us. Of course, the circumstances were very different than they had been in my previous two relationships.

For one thing, we were adults and had the agency and the budget—not a small factor when it comes to plane tickets—to make a real effort to see each other as often as possible. (For us, that meant one of us flying between our respective cities every two to three weeks.) For another, it was our decision to be apart because of major career opportunities, not because we were already in school in different cities.

I asked my boyfriend how we made our long distance relationship work. He said we had an “essential toolkit”: FaceTime, airline status and plenty of points, a commitment to a regular visiting schedule, and a knowledge that it wouldn’t be forever.

The fact is that while we spoke almost every day and saw each other almost every week, we had both made a decision to prioritize our careers in that moment. It never felt impossible. I always knew that distance wouldn’t be the cause of a break up.

In the end, we decided to live in the same city again because we love each other and wanted to share our lives in a real, long term way. I will never be the person who is able to do long distance forever; I derive too much comfort from being with my human. But a feeling of security and confidence in my relationship means that we can be independent without having to break up.

And now I know that our relationship is the for real, forever kind.

Emily Ramshaw for The BeeHive