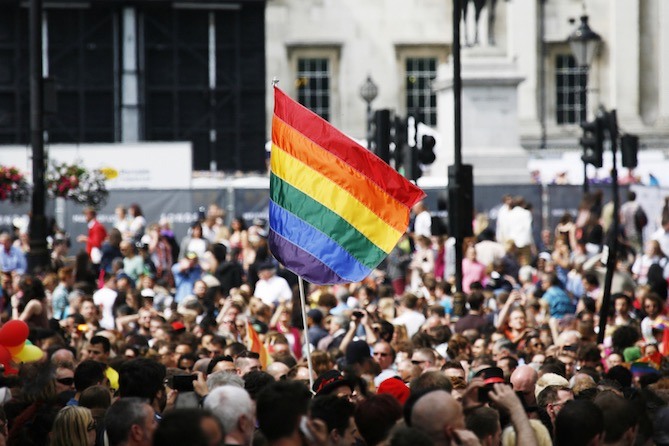 Note to Self: You're Going to Come Out — Here's What I Want You To Know

Editor's Note: This January, in the spirit of the You, First special series, we asked our contributors to write letters to their younger selves. In doing so, they are sharing with their former selves — and us — how to stay true. That is, how to stay true to their desires, to their worth, and to their hopes and dreams in the face of different challenges and experiences.

You’re 23 now, and for as much time as you’ve spent chasing your dreams, you’ve also been pretending to be something you’re not. You’ve become so good at hiding, at minimizing the parts of yourself that scare you, that you almost believe they’re not there. Almost.

Soon, you’re going to come face to face with some major changes. At times you’ll question whether or not you’re doing the right thing. The good news is, every decision, every mistake, every move will bring you closer to being the person you’re supposed to be — you just have to be patient. It’s time to start putting yourself first, to stop letting your fear define you. I know that you’ll struggle, but remember to be kind to yourself in the process.

By now, you’ve been in a relationship for more than 3 years with your college boyfriend, which has been tumultuous at best. Deep down, you know you’re not happy, but you’ve always felt too insecure to leave. When he brings up future plans, you’ll panic at the thought of settling. You’ll say you’re not ready, but even when the engagement talk comes to a halt, the anxiety and sadness you feel burning you up inside won’t. After a few months, you’ll make the decision to break up.

Around the same time, you’ll start a new job and move into a new apartment. You’ll make new friends, and with your newfound independence, you’ll find your style, get back into old interests, learn new hobbies, and start dating again. It’ll feel like your life is finally on the right track.

By the time you’re 24, you’ll have spent an entire decade almost living. And then you’ll do something completely unexpected.

One night, you’ll be out with friends at a bar, and you’ll find yourself flirting with the bartender. You’ll tell her that you love her hair, that she’s so pretty. And she’ll laugh and say the same back to you. She’ll bring you another drink, and soon you’ll be holding hands over the bar. You’ll exchange phone numbers. And in a moment of courage, you’ll ask if you can kiss her. (She’ll say yes, by the way. You’re welcome.)

When the butterflies subside, you’ll have a lot to figure out.

Over the years, you’ve confided in friends that you didn’t think you were straight, but almost as quickly as you’d realize this part of you was there, you’d shove it aside, swallow it down, hide it away. Not because other people couldn’t handle it, but because you couldn’t. Over the years, there have been so many Almosts.

You’ll remember being 14 and realizing that you had a crush on your friend’s cool upperclassman girlfriend, unsure of what that meant for you.

You’ll remember those nights when you were 15 and you stayed up late to watch South of Nowhere, but especially the night you watched the episode when Spencer realized she was gay. “He's cute, I'm attracted to him — then I notice the girl he's with, and I'm more interested in her,” Spencer explained. “And that's what scares me." And you thought, “me too.”

You’ll remember when you were 17 and — despite having boyfriends for most of high school, despite never sharing how you felt with anyone — you found out that someone had spread rumors that you were gay. You laughed them off, but you were terrified.

You’ll remember when you went to college and tried to own your identity, only to cast it aside when you wound up with your boyfriend. You had yourself convinced that, since you’d only ever dated cis men, your queerness didn’t count. You’ll later learn a very important lesson: that who you’ve dated doesn’t equate to who you are.

By the time you come to terms with your sexuality at 25, you’ll find another way to water it down. You’ll tell yourself that your closest friends know, and that’s enough. You’ll tell yourself that there’s no reason to come out to your mom until you’re in a relationship. You’ll convince yourself that you’re not hiding, even though it’s so obvious that you are. And it’ll work for a while, until one day it just doesn’t anymore. A few months before turning 26, you’ll come out to your mom, and she’ll tell you, lovingly, that she’s proud of you.

The relief you’ll feel won’t be because you told your mom or anyone else, for that matter. It’ll be because you admitted it to yourself. You said the words out loud. You gave yourself permission to be who you are. You’ll realize fairly quickly that it’s never been about coming out to others — you know that coming out is personal, and it isn’t always the right decision or a safe decision for many people.

For you, it was about coming out to yourself.

I know that, right now, from where you stand, all of this comes as a surprise. It’s going to be a long, stressful process. But as 27-year-old you, here’s what I want you to remember, for now and for always: Remember your worth. Don’t let anyone else dictate who you are. When it feels like everything’s going wrong (and there are plenty of times when it will), when you find yourself in darker places, remember that your acceptance of who you are will always be a tiny bright spot. Hold onto it.

And the next time you find yourself on the edge of almost doing something thrilling, don’t let your fear stop you. Take the leap.

And it’ll be so worth it.

Love,
Your Future Self