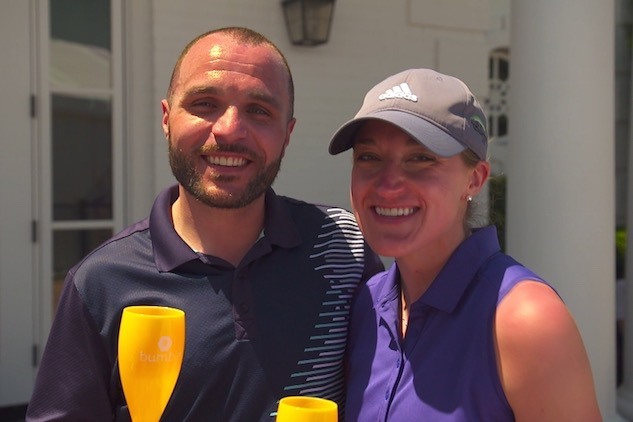 Although Sean and Andrea grew up in the same area, they didn't reconnect until Justin moved back home in May 2017 to be close to his sick father. New to the South Dakota dating scene, Justin hopped on Bumble and quickly discovered that his perfect match had also been his fellow high-school student.

Positive that Andrea was "the one" but unsure how to pop the question, Sean took a chance and reached out to the pro-golfer over Instagram, asking if he would help him set up a proposal during the Wells Fargo Championship. Justin jumped at the opportunity and the two began forming the perfect game plan to surprise Andrea on the first tee.

During the tournament pro-am, Andrea and Sean watched with other spectators behind the first tee. Justin approached them and greeted a shocked Andrea with a golf ball that read "Will You." Sean took over from there, getting down on one knee to finish out the famous line.

Following the proposal, Bumble surprised the beaming pair with a bottle of champagne and a $5,000 contribution towards their honeymoon fund. To see Andrea and Sean's Bumble story and learn how a simple first move turned into a match made in heaven, watch the video below!