John Didn’t Think He’d Ever Find Love Due to His Visual Impairment. Then He Met Bria.

In December 2018, after having been on Bumble for half a year, John, 28, was just a few swipes away from quitting dating apps for good. “With me being visually impaired, I was really looking for somebody who would accept me for who I was,” he said. “I told myself that I was gonna give it one more chance.”

That same night, he got his first match: Bria. As it happens, she was also his last match.

John didn’t know it then, but Bria, 27, had also been ready to quit dating apps. Her last relationship was abusive, and she was looking to settle down with someone who would appreciate and accept her as she is. While she was initially looking to date a Black man, Bria decided she’d keep her options open this time.

“I’m part of the Black community, so it was normalized that Black women have to be with Black men,” she said. “But I’ve never been the type to discriminate when it comes to who you love.”

After a series of dates with men who didn’t seem to want to commit, she gave Bumble one last try. Bria noticed from John’s profile that he wasn’t like the men she’d traditionally dated. For one, he was white — and she noticed that he had a visual impairment. “I knew his eyes were different, but I honestly didn’t care,” she said. “I cared about his heart and how genuine he is.” 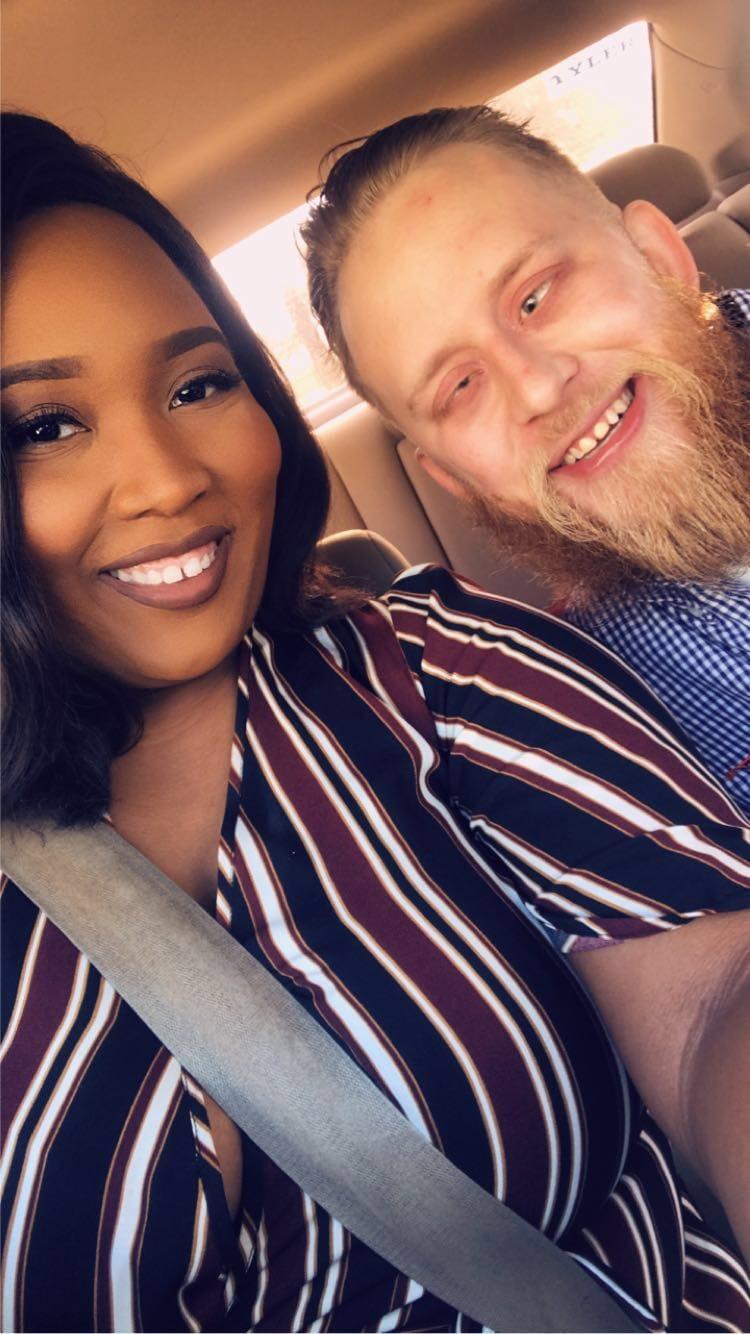 They began messaging in the Bumble app immediately, and within two days, exchanged phone numbers. The connection was instant, they both said. “I feel like he was my best friend from day one,” she said. “It was so easy,” he added. “I felt like I’d known her for years.” The conversation was seamless. Well…almost. John adds that, due to the size of the text, “Every time Bria would write to me, I had to screenshot everything to blow it up to see it.” He explained that this is a common issue with social networking apps.

They texted for the next month, bonding over a love of sports — particularly football (both are diehard Dallas Cowboys fans) — their Christian faith, food, and family. At the time, Bria was finishing her senior year at University of Texas at Tyler, while John was living with his family in what he refers to as “the sticks” in Louisiana.

In February, they planned to meet for their first date: a weekend trip at a midway point between them, in Shreveport, La. during Mardi Gras. The extended weekend date included dinner, a Mardi Gras parade, and couples massages. “It was my first Louisiana Mardi Gras event and it was super special having him to experience it with,” Bria said. She saw him again in March, over her birthday weekend, and they grew closer. During a hectic last year of undergrad, “he was there for me and supported me through everything that I went through,” she said.

The relationship has not been without its challenges, however. “I had to really be patient because with him being visually impaired, I’m the one that has to drive everywhere,” Bria said. She also adds that the couple gets “tons of stares” when they are in their hometowns. “It doesn’t bother us because we just look back, like, Hi, how are you? We’re just a couple dating.” John adds: “Take a picture!” What matters more, the couple says, is that their families instantly accepted each as their own.

That spring, they moved in together, settling in Houston, Texas, where Bria is a teacher. In July, John proposed. “It completely blindsided me,” she said, as John interjected, “No pun intended!” They went to dinner on their monthly anniversary, and John suggested they stop at the park to watch the sunset. Unfortunately, they just missed it, and Bria’s family was already waiting for them at home. John proposed there instead, handing Bria a letter he wrote in Braille.

“I knew something was happening because he asked me to learn Braille the week prior,” she said. “I had never been in a relationship before I met Bria,” John said. “This is the first and the last relationship I will ever be in.” 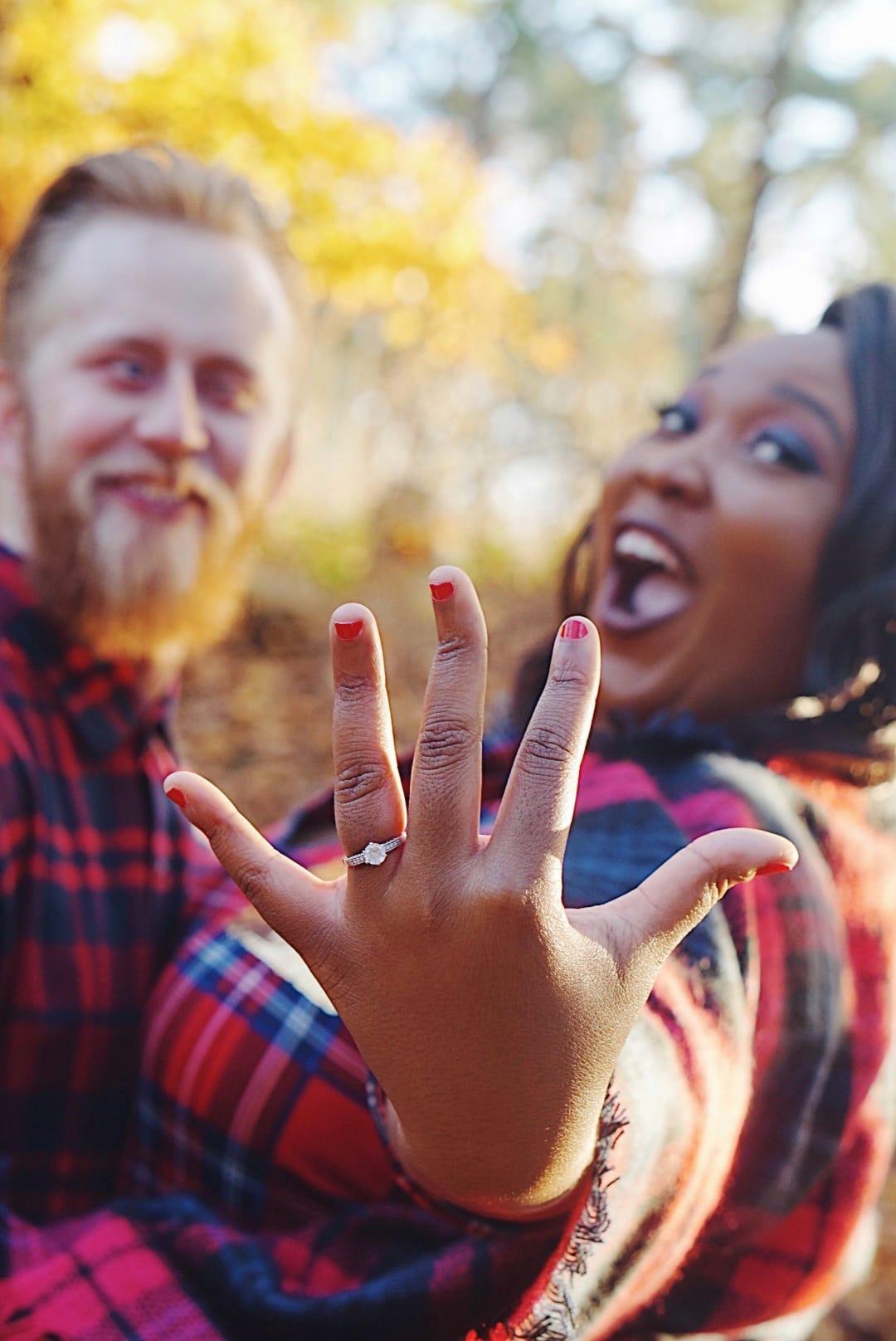 In the meantime, they’re planning a wedding amidst the pandemic — a process that both say has been remarkably stress-free, as vendors are willing to accommodate last-minute cancellations. “We are waiting to see if they can actually have it,” John said. “As of now, we do have to wear a face mask and have hand sanitizer. I can deal with that.”

Editor’s Note: Bumble is dedicated to improving our app to make it accessible for everyone seeking love, friendship, and a network. Thank you for being patient with us as we continuously work on additional improvements. We encourage you to check out the desktop version of Bumble, which may work better with a screen-reader for a browser or voiceover software. You can sign into your existing account at https://bumble.com/app, and keep in touch with us with feedback at feedback@team.bumble.com and for support at support@team.bumble.com.