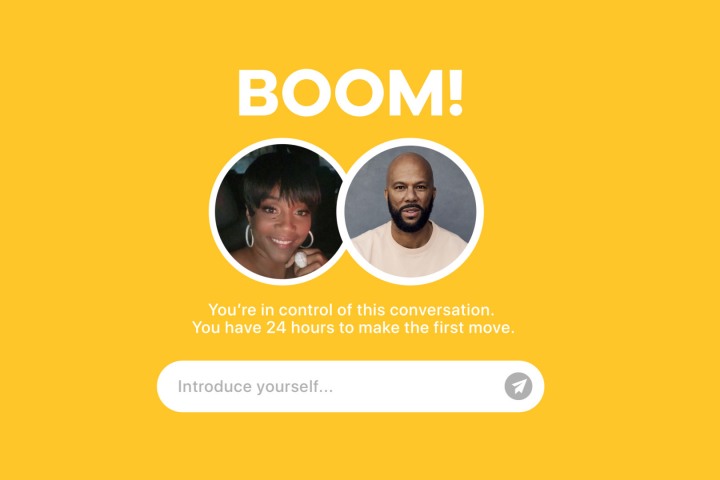 In most ways, Tiffany Haddish’s date night with Common was a typical romantic evening. The actress and comedian wore a chic black dress, while the Grammy Award-winner surprised her with a special delivery: a beautiful bouquet of roses and hydrangeas. The two shared an intimate conversation; Haddish spoke of her dream of adopting in the next few years, while Common — a devoted activist for the underrepresented — spoke of his goal of helping others fulfill their purpose.

But rather than across a candlelit table from one another, the two were on a virtual date, getting together via Bumble Video Chat , one of the app’s many tools to safely connect from home. Given the current coronavirus quarantine in Los Angeles, where both stars live separately, the two decided to try a new way of meeting up.

“Just to get to see you and be with you is great,” Common told Haddish at the start of their ninety-minute date. “I’m hoping you can feel the vibes through the Bumble app!” She sure did: by the end of the night, the two were dancing to some oldies — together, but from their respective living rooms.

As they look at new ways to ensure they stay in touch, Haddish and Common are also giving back, both to restaurants struggling to make ends meet during the current lockdown and to healthcare workers risking their lives on the frontlines of COVID-19.

Haddish and Common donated $50,000 through Bumble’s Community Grants Program to small businesses in the food industry across the country. The two also sent meals to frontline healthcare workers from some of their favorite local restaurants: 2 Cents LA and D’s Original Take Out Grill in Los Angeles, and Virtue Restaurant in Common’s home town of Chicago.

D’s Original Take Out Grill holds a special place in Haddish’s heart: it’s owned and operated by her uncle Damon, who’s been building his classic BBQ business for 20 years.

“When I was a really young teenager, I used to be one of his sous chefs, helping him cut up the onions and celery,” said Haddish, who recommends the restaurant’s mouthwatering beef brisket or butterflied shrimp in garlic butter. “I learned how to cook because of him. Any way that I can be helpful I want to be helpful. Someone had a dream and turned it into something real. I have to support that.”

For Common, the idea of combining a donation to help struggling restaurants and meal delivery to frontline workers was a no-brainer. “The hospital workers, people working in grocery stores, drugstores, people out delivering — they’re sacrificing a lot,” he said. “It could be life-threatening for many of them. We have to really recognize that they are doing hard, stressful work, and we’re actually getting to support local businesses too in the process.”

As for their virtual Bumble date, the two found themselves able to have an intimate conversation, as well as some much-needed laughs. “I had that excitement of, ‘What is this going to be like?’” Common said. “I had a little bit of nervousness, but in a good way. I really felt like I was getting to know Tiffany in a new way in the process. I didn’t want it to stop, to be honest!” Haddish concurred, but added: “Well, my phone battery was going to die!”

The duo told Bumble that they’re both trying to use their time at home to learn and grow. Haddish has been taking advantage of cooking and gardening videos on YouTube — as well as the occasional clip of babies laughing for a pick-me-up. (“There’s nothing more pure,” she said.)

Common has embraced the power of technology to connect with family in Chicago and Florida as well as L.A. His mother and cousin arranged a video chat so his grandmother could see all her grandchildren and great-grandchildren, who had never been together in the same place.

Of course, like many they look forward to reuniting outdoors once the lockdown is lifted. “Tiffany’s done a lot of things — she’s adventurous,” Common said. “So I’d have to really pick out something incredible and new.”

They’re also heartened to be able to make a difference, both to restaurants and to frontline workers, many of whom are working long, grueling hours.

“I have worked plenty of jobs where I didn’t get to eat right away, or didn’t have time to have anything to eat or get a meal,” Haddish said. “I know that the load is heavy right now, and I feel like it would be a relief to someone to be able to be like, ‘Oh, there’s food here for me already? This is great!’ I can just imagine their smile. Eating a good meal is a good thing.”